This is the Cocoa Cups block for Week 7.  I decided to make the most current block and will sew backward to get blocks 4 (Sewing Baskets), 5 (Flying Geese) & 6 (Chubby Chevrons) done as we progress.  Below are the other blocks that I have completed so far. 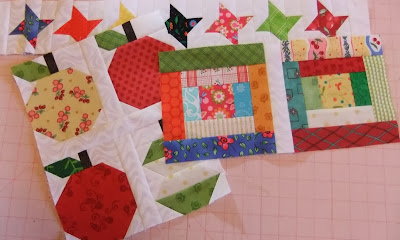 Before long it will all be coming together into this fun quilt! 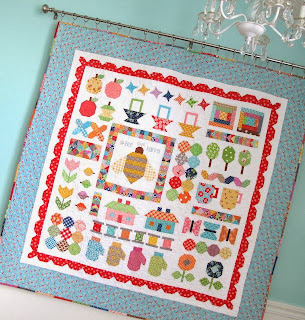 This is a fun project!
Won't you join us?

Christmas Is Still In Motion Here!

Hi!  I hope everyone had a great Christmas!  Ours is on intermission at the moment.  Christmas with the 3 youngest kids is a done deal and was very nice.  Our oldest daughter celebrated her first Christmas as an old married woman in California with her in-laws.
Our eldest, is on the road currently and should be in early next week to celebrate Christmas Part Deux with us, his little guy, his wife and stepdaughter.  He called our Grandson Christmas Eve and was met with a little boys concerns, "Daddy?  How will Santa bring you Christmas presents in your truck?  You don't have a fireplace!"  He did his best to reassure a 4 year olds concerns and remind him that Santa is about Magic and Believing.  Hopefully Daddy will be off the road one day soon and able to spend more time with his boy, in the meantime, Papa, Gramma & Auntie do their best to keep him in touch with this side of his family.
Papa thought it would be okay to hang breakable ornaments lower on the tree this year, especially since this shortest tree ever would be elevated...surely no small hands would disturb them... 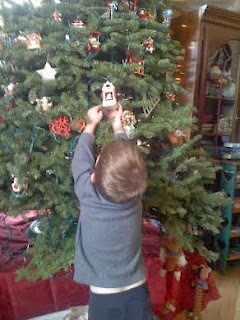 Maecee has loved bouncing around in the snow... 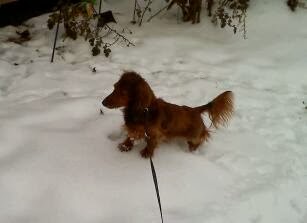 while Shooter has preferred cuddling on the electric throw...
typically dachshund...he usually is burrowed under the blanket 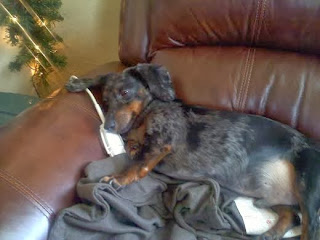 Apparently Santa decided that we've been very naughty this year...
he (very unexpectedly) paid us an early visit Sunday night and left us two little lumps of coal...
We refer to them collectively as Tn'T
or as "The Little Black Otters!" 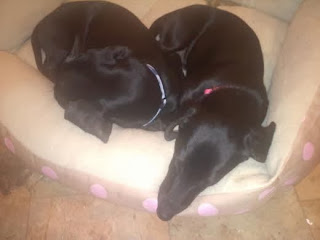 Tank & Tess
Almost 4 month old littermates who needed a quick re-homing.
(Doxie puppies aren't a sturdy choice for 4 busy little boys ages 2 to 8)
This is them pretending to be sweet and innocent...Shooter and Maecee will inform you otherwise!
I've had my hands and arms and slightly busy betwixt caring for a 4 year old some days and two 4 month olds each day immediately leading up to Christmas, but my heart is full too.
And Yes it's December 26th and No, I still haven't wrapped all the gifts!
I did spend Christmas Eve sitting at the table helping my daughter wrap gifts for her friends boys though.  Her friend is a single Mom, with 3 year old twins, so she needed a helping hand and it was fun digging out the Santa paper and labels & metallic pens to make sure that the gifts from Santa were dressed appropriately!  My daughter now has a new appreciation for the lengths I went to make Christmas packages special for the five of them.  Not everything that appeared under our tree from Santa was always wrapped or labeled though.  Certain magical things like stuffed Reindeer, Moose, Holstein Cows & a variety of cuddly Pigs, or glittery snowglobes were thoughtfully arranged atop wrapped gifts or in the limbs of the tree and always found their way into the arms of the child Santa intended them for.
﻿
Well, I'd probably better get back after this belated Santa thing I've got going on and see if I can keep the folks at the Post Office from being too bored in their after Christmas slump!

On Dasher! On Dancer! On Maecee & Shooter!
On shiny black-as-coal puppies who couldn't be cuter!

Just dinkin' around a little with some bloggy Christmas Decorating and doing the happy dance because today was my Friday at work...going to try to do some stitchin' cuz that hasn't happened in my world at all in almost two weeks!
My kitchen however, has a fresh coat of paint and a new handles applied to a couple of cupboard doors.  Washer repairman comes tomorrow and then maybe we'll have my 4 year old assistant for an overnighter and some Christmas-y fun.  Special event and quilt giveaway at one of the LQS's Saturday afternoon that I plan to attend...can't win if I'm not there!  Christmas Party at the home of one of my husbands co-workers Sunday night...missed it last year due to illness and having to be at work early the next morning...don't want to miss it this year even though I do work Monday.  Nice people and I'm completely in-love with the home this couple designed and built...I'm always tempted to scratch under the chin of the full body Cougar mount they have in their family room to see if she purrs and I've been known to stand and grin up at the moose head way up near the ceiling.  I know...girls aren't supposed to like dead animals hanging on the wall...but it's really hard not to love a moose wearing a Santa Hat!
AND then there's the little matter of the wrap up of the Christmas Quilt Along and Challenge is THIS WEEKEND!  I need more time!!!!!

It's Been A Roller Coaster Week, so

Initially my wish was to just jot a note and thank everyone for their sweet comments (even Sue) about my Country Charmers...both the Autumn Birdie one and the SURPRISE! Mission Impossible Christmas one.  I was blown away that so many of you were blown away!  I received words of love and encouragement that mean the world to me...really...you touched my heart!  Lynn has drawn me back to my sense that less is more and has encouraged me to just let the borders on the Autumn Country Charmer be the canvas for some wonderful swirly feathery quilting.  And really...who's gonna argue with Lynn...the woman has incredible instincts! 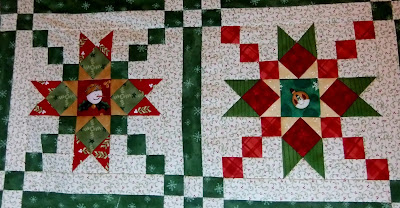 Thursday morning I awoke...grabbed my tablet and found I had an email from Herself the Elf (Sue) to start my day with a giggle and a smurk...and shortly thereafter another from Cuddly Lesley that had me doing the happy dance!  She informed me that Mr. Random had selected my number and that I was the winner of the $20 Gift Card from Fat Quarter Shop which arrived promptly, in two installments in my email box!  I perused and decided that rather than spending any of my precious gift on shipping, I would use it to purchase pdf download patterns.  Instant Gratfication...at least once the website was thoroughly searched and after I decided to sleep on my wishlist full of possible choices.

So I decided, as I said, to sleep on my choices...meanwhile, I kept watching for Lesley to do a post, figuring she was resting her elbow after conversing with me by email and ordering my Gift Card.  I didn't realize til later that she had the genius to made it easier on her elbow by just adding an addendum to her previous post about my being the lucky recipient of the drawing...I was just looking for a new post from her in my sidebar and I certainly didn't want to jump the gun and be doing the happy dance publicly before she had the chance to announce it herself!  Finally I woke up and clicked in and saw what she'd done.  So I've been shopping and downloading and here's what I decided on...and yes...I did add some funds to my prize so I could stop playing eeny, meeny, miney, mo! 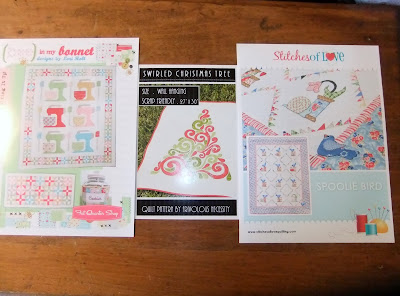 Sorry about the glare...I like to print the covers on heavier shiny photo paper so I have a really nice printjob!  Ain't they cute designs though?!?!?!  I've  been giggling at the mixer and spatula quilt since it was released by Bee In My Bonnet...I can't tell you how many rubber spatulas Santa has left in my stocking over the years...so many that the kids joke about it.  I thought their were so many possibilities for fun with the Swirled Christmas Tree wallhanging pattern and then those little Spoolie Birds caught my attention...I love spool quilts and what is it with me and pudgy little birds anyhow?
So Thank You Dear Lesley...I wish I could give you a hug in person...not just via emails!  Take care of that elbow so you can be back rotary cutting and sewing and writing soon!

So now...Overnight while we were 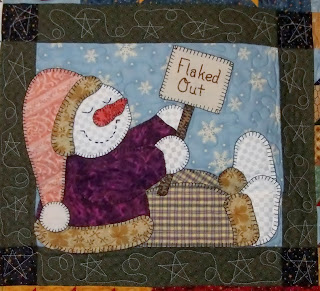 Something was happening...we woke up and 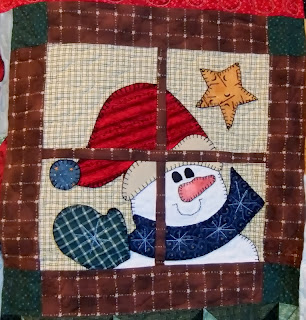 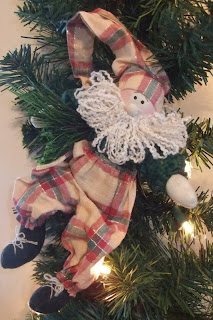 while Papa Bear got up and went outside and starting doing a lot of this... 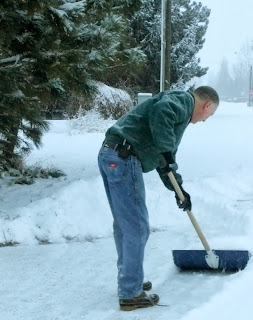 I spent a ridiculous amount of time relacing my snow boots and went outside while there was still the opportunity to get some pristine photos...while cars going by still sounded muffled and quiet and before kids across the street started whooping it up...and before the dogs had too many chances to apply their special yellow snowmelt!
I wanted to get out there while it was still Magic!
It was and is still snowing...
From my kitchen window I saw cotton bolls where sunflowers had once been,
and the tips of our little evergreens held snowballs and snowblossoms! 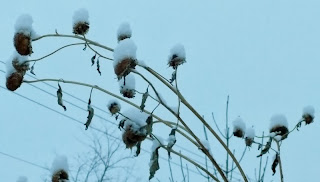 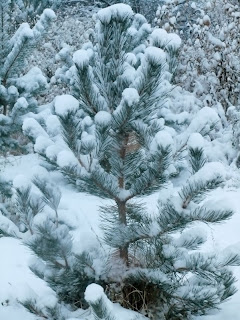 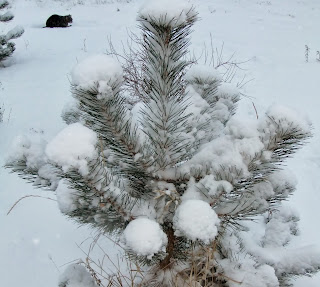 The stump by the driveway has muffin-top 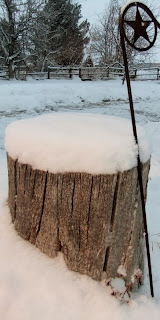 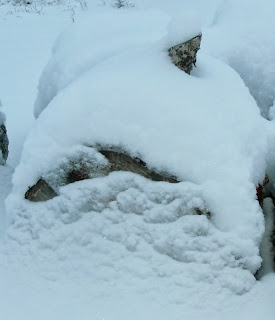 and this log from our old pine tree now reminds me of a miniature snowed in, Basque Sheepherders Wagon with white smoke billowing from it's chimney in its rounded roof..
This old hollow Poplar is where we've found abandoned kittens and have had shiny little raccoon eyes peek out at us in the dark 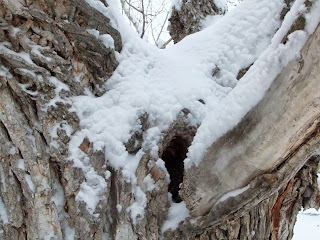 Can you believe this is the spot where I photographed my Christmas Country Charmer for it's debut...just a week ago...remember? 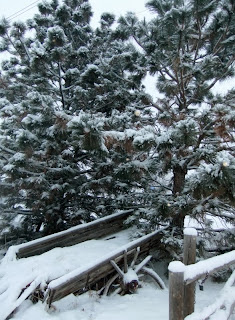 Those big trees were nothing more that little twigs when our 4 year old daughters planted them after their respective preschool field trips to the nursery that replenishes our forests.  The tree on the left moved with us, when it was a little sapling, for the then 7 year old owner to nurture in it's new home, five years later the second little twig joined it and has thrived in the company of it's Big Sister Tree. 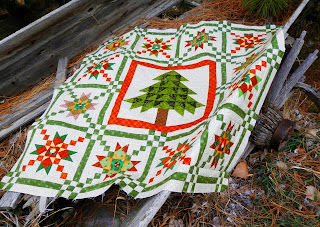 Have You Ever Met a Not-so-Abominable SnowLlama?
Can't be abominable when you wear a permanent smile...minus fangs... 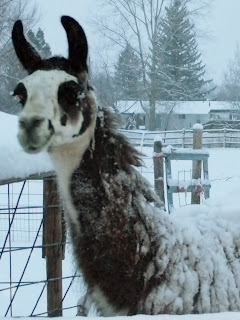 Penzance woke this morning wearing a white blanket over his usually dark bay back.
Silly llamas...building shelters is practically a waste of time...they just settle into their Tea Cozy positions with legs all tucked beneath their wool and let what may come their way fall on them...goats on the other hand will tell you that if a drop of rain hits their precious heads they will surely melt!
Maecee and Shooter then joined me for a game of "Where's The Kitty?" 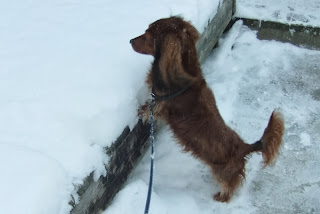 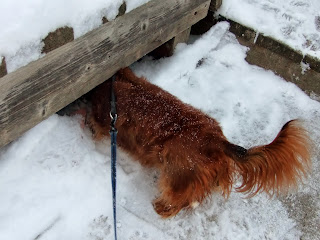 Then it was time for a break... 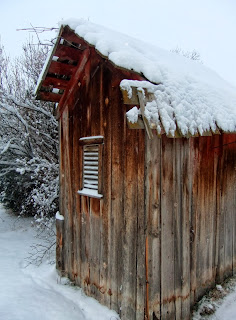 No! Not here!  We have splurged on Indoor Plumbing, although it's a little frigid in there too! 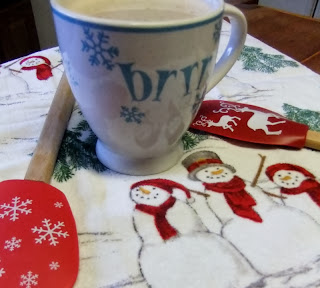 Here...with my mug that says it all!
Well almost all... 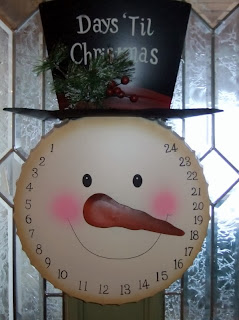 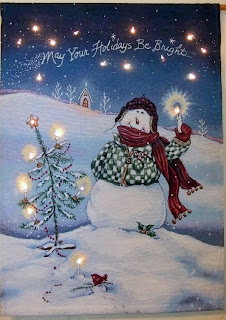 Now it's time to venture out in the snow and try not to skid into anything so that the painting project can be complete...its really time for some new light switch and outlet covers and insulation to insert behind them to block the breeze that is currently flowing freely through those gaping holes...have I mentioned our money pit,  house is 102 years old recently?????
Happy Snowdays, wherever you are!
~Nancie Anne 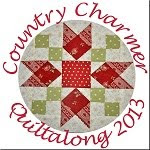